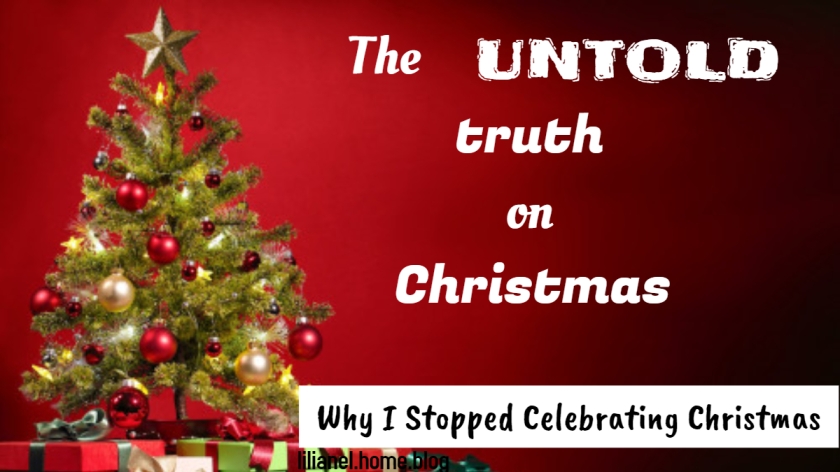 Before I move to the history of Christmas, I want us to look more at how God sees idolatry.

…He took them from them and, using a tool, fashioned them into a molten calf. The people said, “This, Israel, is your god who brought you out of the land of Egypt.”

When Aaron saw this, he built an altar in front of it, and then he proclaimed, “Tomorrow is to be a festival to the LORD.”

They got up early the next day and offered burnt offerings and brought peace offerings. Then the people sat down to eat and drink, and then they got up to play (Exo 32.1-6 Bible verse).

Their intention seemed harmless and good, but it was evil and an abomination before God. God was angry with them. God wanted to burn the entire nation with fire, but Moses interceded. God relented. Only the tribe of Levi was repentant. God ordered Levi to slay anyone in the camp. On that day, about 3000 fell dead by the sword.

In like manner, if Christmas is the image of another god erected in the name of the LORD, judgement awaits all idolaters regardless of their ignorance and well wishes. God is merciful to the repentant, but his punishment is terrible and inhuman. Idolatry is a sin that leads unto death. Eve was deceived by Satan, but she was still punished for her sin. Ignorance is not excusable at God’s tribunal.

Fixing or writing a new commandment, leading a new order, in the name of God, is arrogance.

…Surely, to obey is better than sacrifice, to pay attention is better than the fat of rams. Indeed, rebellion is the sin of divination, and arrogance is iniquity and idolatry (1 Samuel 15.22-23 Bible verse)

Pay attention to the words of Christ. Reject any alterations. This is the only way to win against the devil’s deceit. King Saul lost his kingship because of arrogance. Arrogance is the sin of idolatry.

The early church did not celebrate Christmas (no record in the Bible). We must be careful not to erect a strange altar before the LORD.

Let us look at historical sources on the origin of Christmas (Encyclopaedia Britannica).

The meaning of Christmas

Christmas is a secular “Christian” celebration. Christmas (mass on Christs’ day) was originally termed Yule, which referred to the feast of the winter solstice.

One widespread explanation of the origin of this date is that December 25 was the Christianizing of the dies solis invicti nati (“day of the birth of the unconquered sun”), a popular holiday in the Roman Empire that celebrated the winter solstice as a symbol of the resurgence of the sun, the casting away of winter and the heralding of the rebirth of spring and summer. After December 25 had become widely accepted as the date of Jesus’ birth, Christian writers frequently made the connection between the rebirth of the sun and the birth of the Son.

Even though there is some uncertainty about the precise date and origin of the tradition of the Christmas tree, it appears that fir trees decorated with apples were first known in Strasbourg in 1605. The first use of candles on such trees is recorded by a Silesian duchess in 1611.

Toward the end of the 18th century the practice of giving gifts to family members became well established.

All historical facts do not cite any command from God to celebrate Christmas. The Santa Claus, the tree and candles are all symbols of idolatry. Carving any spiritual or physical image in the name of God is idolatry.

The LORD Jesus commanded the church to remember his death by breaking of bread (Luke 22.19 Bible verse). He never commanded that we celebrate his birth. The LORD Jesus is still working, his servants are still toiling, till the arrival of His earthly reign. We shall only celebrate at the wedding feast with the LORD Jesus.

I tell you, I will never again drink the product of the vine until that day when I drink it with you once again in my Father’s kingdom” (Mat 26.29 Bible verse).

This is no time to celebrate. We are in the dark hour in the battle field, in an era where many will be deceived and lost (as foretold by the LORD Jesus). The devil now appears as an angel of light.

KEEP WATCH. Your enemy, the devil, wants to make you a vessel of God’s wrath.

I am a follower of Jesus Christ. I am very passionate about God and His Kingdom. I believe in stern obedience to the words of Christ. I love the truth. I will rather pursue bitter truth than settle for a sweet lie. View All Posts

2 thoughts on “The Untold Truth on Christmas: Why I Stopped Celebrating Christmas”

7 Deadly Sins in the Bible